A promise made. A promise which could no longer be denied or delayed!

As she placed the final package gently and tenderly in the back of her car she could not help but allow her thoughts to wonder to the events which brought her to this place.  A year filled with illness, hospitals and loss.  A year which led to a promise.  A promise that would lead her on a journey to a familiar destination.

The 700 mile drive before her was one she had taken numerous times yet never alone or with the same intensity or a heart so broken.  Hour after hour, mile after mile she relived the past 30 years with a man whom she had loved with her whole heart.

As she approached the 12th hour her heart began to pound and her stomach began to ache.  The summit ahead at 8138 feet marked the downward decent to her final destination.  Could she hold back the tears that began to fill her eyes?  With her body trembling it seemed the final 12 miles would drag on forever yet pass too quickly.  The moment had nearly arrived.  The moment she had promised and dreaded for 7 months.

As she made the final turn, heart in her throat, she knew the purpose would only be moments away.  Driving up to her husband's boyhood home, she saw his mom.  Opening the car door, their eyes met!  Each knowing the other's pain they embrace but nary say a word, neither allowing their tears to flow.  Smiles and hugs were abundant yet words escaped their lips. His name is not mentioned, the loss too great! Thus begins a two day journey of silently bonding in their pain while and at the same time strangely enjoying each other's company.

The children and grandchildren arrived as well as siblings for what would be their final farewell to the man whom loved them well and left them too soon.  It was a beautiful Saturday afternoon when the video began reflecting on a life cut short yet a life that was lived to its fullest no matter what circumstances arose.  Tears began to flow freely as did moments of smiles and laughter as memory after memory flashed across the screen reminding them of the joy he brought to their lives.

Unknowingly he had chosen his final resting place many years before.  When he was just a young boy, somewhere in the mountains, he found a lone cactus and brought it home to his mom.  He planted it with full hopes of it blossoming and thriving in a land not known for its kind.  It lived, yet never thrived nor ever bloomed. This year however, would be different.  This year it would bloom all spring with beautiful yellow flowers.  Hmmm...this year it had purpose and hope!  This year it knew the one who put hope in it, was coming home!

As family watched from the top of the hill, she carefully walked down the hillside and gently placed her package down.  She lovingly dug a small hole just below the cactus and then began to fill it with what was left of her soul mate.  Tears of loss and grief freely ran down her cheeks as she placed her beloved in the ground.  Collapsing, she covered him with earth and with the aid of her son placed a special rock over the site.  His son found this rock at the bottom of the hill and thought it looked like a chair.  He felt his dad would enjoy sitting there watching the sunset night after night as he had done so many times in years gone by.

Looking up toward heaven she caught sight of his mom and thanked God for the many years of friendship they had shared.  Gathering her strength she slowly climbed the hill to sit down beside the mom who had lost her child.  Together they held each other and sobbed for what seemed like hours!  A bonding moment neither of them ever dreamed would happen yet a treasured moment still the same.

And so a promise was fulfilled.  A promise to bring a son home to his mom! 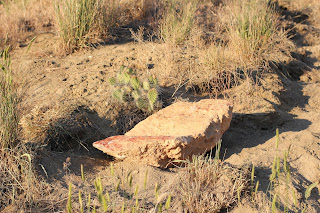 Protected by CopyScape
Posted by Joy Junktion at 10:04 PM