I am so excited tonight to introduce you to a very special young man.
Matthew is our youngest son and one of the joys of our lives.
Matthew came into our lives when he was 4 months old with a death sentence for a prognosis yet God had another plan for his life.
Matthew has chosen to share one of his loves with you.
I hope you enjoy meeting him in his own words:
My progress with horse riding 2008-2010
I started riding in 2008.
My first pony to ride was Spencer I learned to walk and trot during the first lessons I took.
My second pony to ride was Callie. She is a great starter pony but she does not like to jump.
My third horse was Titan. He was the first jumping horse I got to ride. When on Titan I learned to jump cross rails. 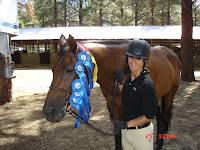 My forth horse was Bose. I learned to steer and trot bigger cross-rails with Bose. I learned how to use a crop on Bose. I also won 6 Blue ribbons and 1 Championship on Bose at the Flagstaff show in 2009. Bose passed away last fall. He was my favorite horse and I still miss him so much

My fifth horse to ride was Chance. I haven't really learned anything but how to fall off a horse on him. For some reason Chance thinks it's funny to make kids fall off of him. 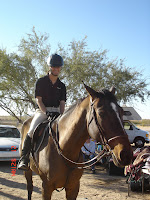 My sixth horse was Coco. I learned to jumped and canter all the jumps on her. I even jumped the roll-top with her this year and that is BIG. My first show on Coco was a wild one because she used to be a race horse and when we were in the arena she thought she was at the Kentucky Derby instead of at Marley's. I still won some ribbons on her though.

The horses that were canceled for me to ride were Hope, Kyle and Classie. Hope was to slow for me and I couldn't get her going. Kyle was too slow for me as well. Classie was the first horse I rode that was fast but I couldn't ride her after not being to stop her in the arena.
Guest horses that I rode in 2009 were Cooper and Carsten. I also rode Colby this year but like Cooper and Carsten he was a guest horse too.
I fell off of Coco and Chance so far but I have learned to direct my falls and so far have not been hurt.
I am good with balance thanks to video-gaming. I can see better with my eyes. Video games can help with vision and focus.
I have pretty much ridden all of the horses at Silver Lining except Gwen and Lilly. Gwen is a giant and Lilly is a baby. Oh, I haven't ridden Prince, Porcia, Winston or Turner because they are other people's ponies and they are mostly small.
I think I could ride any horse slow or fast and I am ready to go 3 FT next year. :)
The next time I write I will tell you about my trainer and all the great friends I have made through horse riding.
And by the way my friends all call me RED!
Posted by Joy Junktion at 3:57 PM