A View From The Thicket 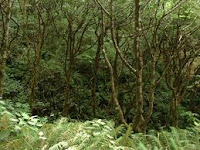 I was raised in a home with guns and hunting. It wasn't unusual or scary to anyone in our family or to our friends. My father and his father before him were hunters and fishermen. Our family enjoyed the outdoors and YES we did eat what was taken.
When I met my husband I soon realized that he was raised the same way. There was never a time when it wasn't just natural to plan a hunting expedition or a fishing trip. In recent days I have been taken back to one such hunting expedition.
It was in the fall of the year during the early years of our marriage that we planned a day trip. Several of us met at hubby's moms' house in the early dark hours of the morning and ventured out to the planned destination. Each team was dropped off at a certain point and then we would hunt and meet up at the 'truck' spot at the bottom of the mountain. I remember the day as clearly as if it were yesterday. It was a chilly morning but as the sun rose it became a beautiful sun-filled warm day. We would walk a little, sit a little as we glassed the mountain side, and then walk some more.
That day was lean on animal activity but full on beauty and peace that is until we began venturing down the mountain to our meet up area.
The specific area that hubby and I had to go through to get to our meeting place was straight through a thicket of Aspen trees and Wild Rose Bushes (in the fall when the area was lean on leaves and heavy on Thorns). Friends, there was No way around it, No was over it, No way under it, we Had to go Through it!!!
I am a fairly tough woman and even in those early years was strong but this was awful. I remember vividly how scared I became as we walked deeper and deeper into the thicket. There came a point were I began to panic. I could not see in front of me, behind me nor above me. I did not think we would Ever find our way out! I knew Mark was with me; he held my hand and kept encouraging me that we just needed to keep heading down and we would eventually get out! I did not have Faith in what I saw but I trusted this man who had Years of experience in situations such as the one we were facing.
YES, eventually we came to a clearing in the thicket and soon were able to visualize our meeting spot. My arms were scratched and bleeding, my emotions raw, but we did get out. I will tell you though, that was the closest to a full on panic attack I have ever experienced, Until now!!
In these days and weeks since my husbands passing I have begun to feel myself panicking. I see myself in the middle of that thicket but this time I am alone! I haven't known which way to turn as I cannot see in any direction. I sit. I give up. I cannot find my way alone. I do not have Faith in what I see. There is no hope!
And then it happens! In four small words and one still small voice it happens.
NO EVIDENCE OF CANCER!!
A glimpse of Faith, A glimmer of Hope, A cause for Celebration!!
Today as I sat in the doctors' office with my mom, sister and brother and heard those sweet words I felt a needed touch from the Lord and a hope for the future. I did not realize how much fear I have been holding in these past weeks as we waited for these results. I did not acknowledge how I had gotten lost in the thicket of depression. The thought of losing my mom so soon after losing my precious hubby was more than I could bear.
Mom does have Moderate Emphysema and the mass in her left lung in consistent with a previous episode of Valley Fever. They will retest in three months and watch the spot for two years. We believe it will Never be cancerous! We are praising God for this good report.
And so today I have a small glimpse of Faith! As Mark said: As long as we keep heading down we will get out! Hmmm...the Lord has reminded me today that as long as I keep 'down' on my knees, 'down' on my face before Him, I will have hope of coming Through this thicket!
I know on the other side of this there will be Joy! But friends, in the middle of this place, it is lonely, empty, scary, painful and fear-filled!! However I will hold fast to God's promises:
I have told you this, so you might have peace in your hearts because of me. While you are in the world, you will have to suffer. But cheer up! I have defeated the world. John 16:33 CEV
Tonight I am
Considering Cancer Free With Super Great Joy,
Cindy
Posted by Joy Junktion at 3:45 PM