As I got into my car, hands filled with plumbing supplies, tears filled my eyes.
Home Depot is not the place I usually cry but this trip was hard. It was the first Home Depot trip I have made alone to purchase something I needed for the house since Mark's passing. Home Depot was the place we always shopped together. There was nothing in me that wanted to make this trip except for the need to replace our garbage disposal which broke just a few days after Mark passed.
Living without it was becoming troublesome, especially since that side of the sink would no longer drain and it began to have a stench associated with it.
I've been watching too many Hoarder programs and one thing I have noticed is that most of them (the hoarder) became hoarders after a tragic event. They begin to not care about their homes and cleaning is the last thing on their list of 'to do's'. Fixing plumbing or electrical issues is also something they ignore. I DO NOT want my television debut to be on Hoarders so I thought replacing the disposal was becoming a priority.
So with tears streaming down my cheeks I came home and began the project.

The first priority was to gather ALL of the necessary equipment and parts for the job.
And I mean ALL ~~~

This is what I needed to replace. It leaked all the time so that blue bowl was the water catcher (I have since thrown it in the garbage). 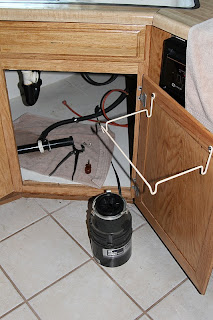 Next, I needed to do a little electrical work ~ attach what was in this package

To the wires coming out of the new disposal

Do some good old fashioned caping and taping ~ making sure ALL connection were color coded correctly and tight fiting.

Everything is now taken apart and ready for the new disposal and 'stuff' to be inserted.

I really did do this by myself with the help of my favorite youngest son. 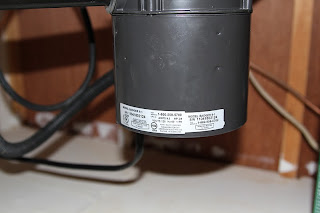 Putting everything in place.

TA DAA
It took about an hour I upgraded to a 3/4 HP instead of 1/2
Thanks to MJC who handed me tools, parts and held the flashlight
He also got to plug it in
It does work, no leaks and nobody was injured in the process
So I sat on the floor and cried again!
There is still nothing in me that wants to live this life without Mark
But I am so grateful that he was the kind of husband who encouarged me
to work along side him through our 30+ years together
Now, I believe I have earned myself that sprite and a little TV time
Considering An Accomplishment With Joy,
Cindy
PS: Thank you Home Depot Staff for helping to make sure I got everything
I needed on the first trip :)
No services or donations were received for this post, I just LOVE Home Depot
Posted by Consider It All Joy at 6:01 PM