The social worker said:
"Don't get your hopes up ~ he probably won't live"


The doctors all said:
"He's going to die within a year"


The social worker said:
"The courts want him back with his birth family"


Many people said:
"Let's place him in an institution until he dies"


The therapist said:
"He will never walk"

But God...Had Another Plan!
I could go on and on about what 'people' said... 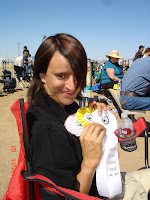 This is his first English Style riding competition!

This is NOT Special Olympics -
This is the Copper State Horse Show with ALL Typical Riders!
Thank you to Kristin Cason ~ Silver Lining Hunters/Jumpers
You have not stopped believing in Matthew!
"For I know the plans I have for you, says the Lord, plans to prosper you and not to harm you, plans to give you hope and a future." Jeremiah 29:11

I am so thankful that God gave us hope and the future nobody thought existed.

Don't ever give up on a dream!

Because God...Has Another Plan
Posted by Joy Junktion at 1:04 PM